The origins of Ingersoll watches date back to 1882 in New York, when brothers Rober Hawley and Charles Henry Ingersoll decided to set up a small watch business: Ingersoll Watch Company, associating with the Waterbury watch company. They had a very clear and defined objective: to offer high quality watches that were affordable to everyone.

The first watch they made was the "Universal", a model they started selling wholesale, but ended up selling directly to customers. They continued with the Yankee model, which became the cheapest watch on the market, with a price of 1 dollar a unit. So successful was this watch that it became known as the "dollar watch".

In 1904, the company established itself in London, where it began to market its Crown model, a pocket watch that cost about 5 shillings, the equivalent of one US dollar at the time. By 1916 the firm was producing 12,000 watches a day in 10 different models and in 1919 they launched the Radiolite model, the first in the world with a luminescent dial.

Subsequently, as a result of the First World War, Ingersoll went bankrupt, with only its British subsidiary surviving and thus becoming entirely British owned. Ingersoll continued to manufacture watches, and in 1930, with the launch of the Mickey Mouse watch, the company's numbers picked up again, selling 5 million of this model during the first years of marketing. After the Second World War, Ingersoll merged with Vickers Armstrong and Smiths Industries Ltd to continue making inexpensive watches inspired by famous people.

Today, the Ingersoll brand is recognised throughout the world, and thanks to it, great advances have been made in the manufacture of watches such as:

The most characteristic feature of Ingersoll watches is the wide variety of styles and functions they offer. There are models with chronograph, moon phase, GMT, charge reserve indicator or with a rear glass. The fact that each piece and each collection is so different makes Ingersoll a truly special brand. Also worth noting is its elegant packaging: a beautiful, classic wooden box, which even in some Limited Edition models is a watch winder or oak wood rotor with a glass cover, which gently turns the watch when not worn, to keep the main spring wound and therefore the watch running.

Although Ingersoll watches have very different characteristics, the vast majority of them have one common detail: they show the internal mechanism on their dial. This is what is known as the Skeleton dial. 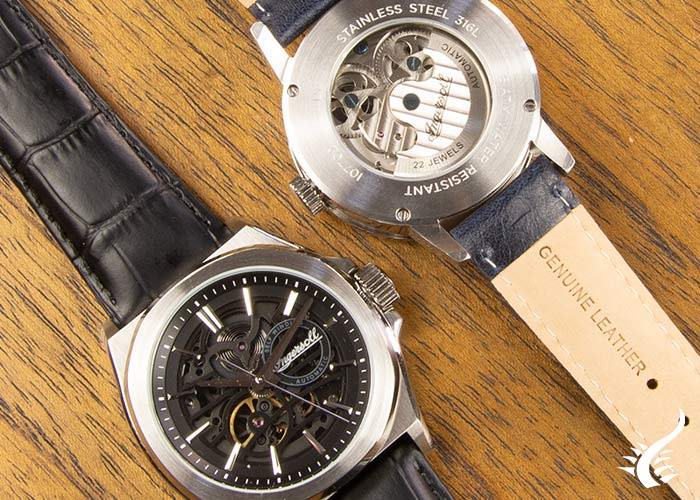 1892 is Ingersoll's main collection, created in homage to the year the brand was founded. The watches in this line are made with top quality materials, which stand out for their durability and precision, but at an affordable price. Within this collection there are many sub-lines, such as: Orville, Producer, Catalina, Shelby, Herald, Hawley...showing both automatic and quartz watches.

The Michigan sub-collection shows us clocks with a special meaning, since the Ingersoll family pioneered the establishment of Delta County, Michigan in 1835. These watches feature a robust design and a two-tone case that characterizes this line. 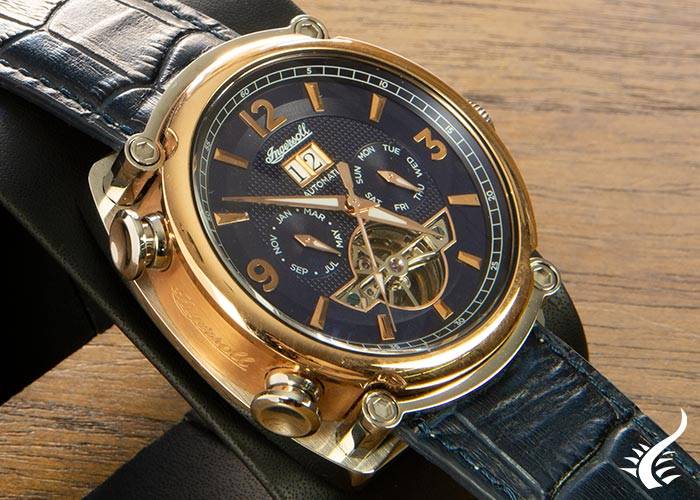 On the other hand, the Grafton line stands out for presenting watches with a large dial and finely sewn straps, in homage to Captain James Ingersoll Grafton, a veteran involved in the American Civil War.

It is the collection that pays tribute to the artisans and masters who made Ingersoll a renowned brand in the 90s of the 19th century in the United States. In this line you can see designs inspired by the "Universal" or "Yankee" model. With watches for both men and women, you can see sublines such as: ChronicMuse, ChronicGem Ladies, ChronicHollywood or ChronicTrenton.

Within this collection we could highlight the Trenton Radiolite model, a flat case watch that imitates an original pocket watch, with a large black dial with a small second hand. 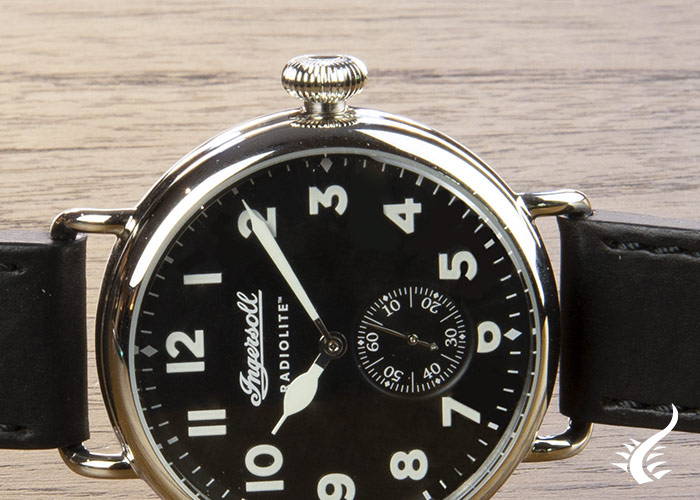 As well as the Hollywood model, characterised by its dial design, which shows part of the interior of the watch and has a moon phase indicator. 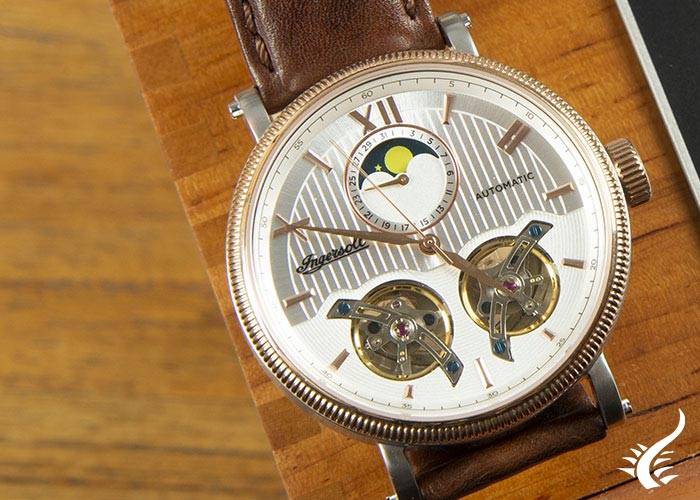 Finally, Discovery is the brand's sportiest and most casual collection. In the pieces of this line you can see unique details mixed with elements that are highly functional, such as presenting the inside of the watch visible on its dial.

Referring to one of Ingersoll's original suppliers, located in Waterbury, the Scovill line shows models with a sporty and clean design. All of them have indexes and hands that light up in the dark to provide greater visibility. Similarly, the Director series, made up of models that show their inner mechanism either totally or partially, features superluminova coated hands. 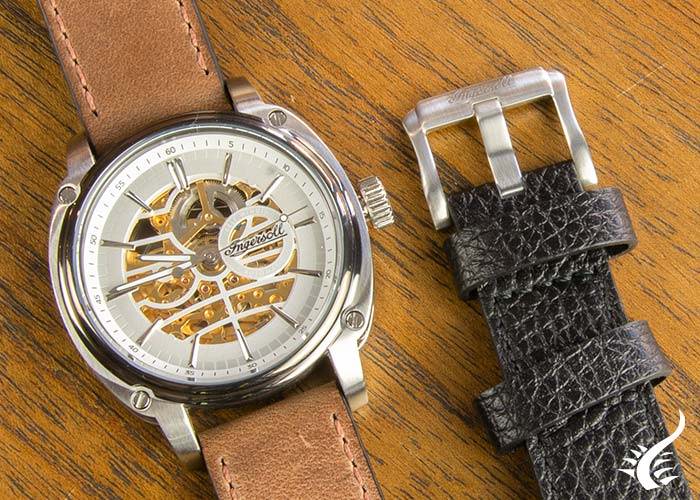 Finally, as mentioned above, after World War II, Ingersoll partnered with Victor-Armstrong to revive the watch industry in the UK. Hence the name of the Armstrong line, which presents models that combine classic watchmaking with modern design, using leather straps and large rivets. The Ingersoll logo appears on one side of all its models. 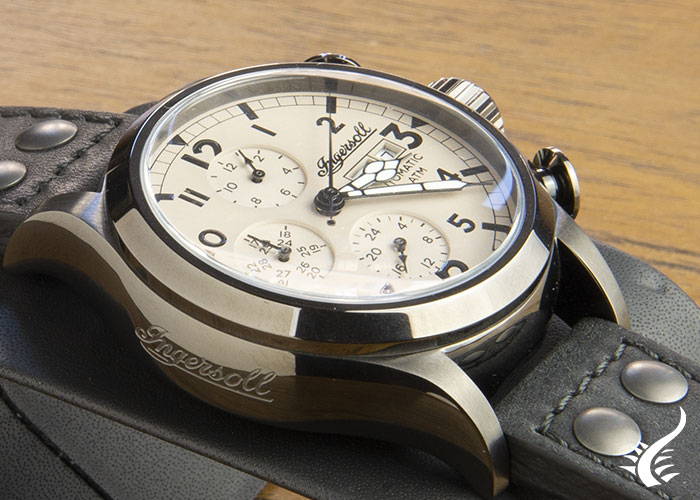 If you want to know more about this magnificent watch house, do not hesitate to visit our website.

Take advantage of our 24-hour delivery for many Ingersoll models! And, of course, if you require further information do not hesitate to contact us. It will be a pleasure to help you! 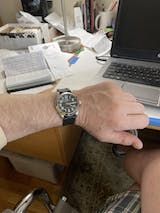