Friday Outfit: May the 4th be with you!

Friday Outfit: May the 4th be with you!

Today, May 4, we celebrate Star Wars Day, the most internationally known movie saga. Even though the first film of the saga was released on May 25, 1977, fans use the fourth day of May to celebrate the Day of the Force.

The origin of this tradition comes from 1979, when Margaret Thatcher took office as Prime Minister of the United Kingdom on this date. Her political party placed a congratulatory advertisement in The London Evening News, saying "May the fourth be with you, Maggie. Congratulations." This sentence is quite similar to that which Yoda tells Luke Skywalker -"May the force be with you"-; so this was the reason for the followers of "Star Wars" to take this day for the celebration.

HOW TO GET "THE FORCE" IN YOUR PENS?

S.T. Dupont has a series of limited editions inspired by the Star Wars saga; if your choice is the fountain pen, S.T. Dupont Star Wars Premium made in palladium with a 14K nib will make you feel like a militant of the Rebel Alliance; while with the S.T. Dupont Défi Star Wars ballpoint, you can cross the universe in your space fighter.

For those who rather rollerball pens, we suggest Cross Townsend Star Wars R2-D2; made in platinum with chrome trim, so you can always carry your very faithful android with you.

To set your look, we have a genuine leather S.T. Dupont Line D Limited Edition Star Wars wallet. So you can carry your Jedi card in a totally luxury accessory.

As the great master Yoda would say, "may the luxury be with you!"

I just love it, and IguanaSell was superlative.

I have a small collection of automatic watches. However, due to their inevitable weight, none are comfortable / suitable for cycling with. I also have small wrists. sub 40mm waterproof quartz are very rare. I'm so glad victorinox issued this model. I'm very happy with watch!

This pen exceeds all my expectations and Iguana Sell is a fabulous place to shop. It’s like yours writing on clouds. Competitive pricing and super fast shipping. I recommend to everyone reading this, Iguana Sell is completely legit. Shop with total confidence. Atilio E. 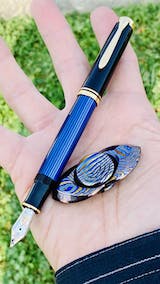