Pen Gift Guide. For beginners, for collectors, for calligraphers...for everyone!

LOOKING FOR THE PERFECT WATCH?

Watchmaking Gift Guide. For him, for her, for techies, for minimalists...for everyone!

As it couldn’t be otherwise, the first Friday Outfit of this month is inspired in literature, which is historically inseparable from fountain pens. April is worldwide considered as “The Letter Month” due to the countless ephemeris related to great authors that are celebrated this month.

In fact, April 23rd was instituted by UNESCO as the World Book and Copyright Day to commemorate the death of Miguel de Cervantes, William Shakespeare and Garcilaso de La Vega in 1616. Also, due to the importance of The one-armed Man of Lepanto’s fountain pen in Spanish Literature, 23rd April is also the World Spanish Day. The ONU’s purpose for this is to “spread the history, culture and use of spanish as a language”

This year, The Cervantes Prize goes to Sergio Ramírez, who will become the first nicaraguan and central american in achieving this award.Former lawyer, the fountain pen of this essayist, novelist and journalist have a deeply social and political background.

For him, the most special feature of Don Quixote is that he didn’t desire to return from his trip. In Cervantes words, “who reads much and walks much, sees much and knows much”.

And you? What do you like the most about the act of reading?

10 tips for maintaining your watch

A beautiful pen that writes amazingly and feels gorgeous to write with, quick delivery too made it a wonderful experience!

Genuine watch, brand new and delivered fast. So everything i worried about was good. Genuine here now on first order discount too. I would use them again.

Lovely pen the med nib is a little thick 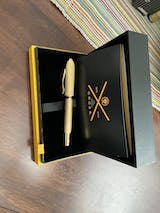