Writing instruments date back to 3000 BC. Over time these elements have developed and have had constant innovations. The first pen to be used as a writing instrument was the feather quill, hence its name. Its tip was treated to optimize it for use and the hollow channel held the ink. This system inspired people like Waterman to innovate and become part of pen history.

The invention and history of a collector's piece

Before the use of pens for writing, texts were made in clay and wax with styli, but the clay tablets were heavy and brittle and the wax ones did not last long. Looking for a solution, came the calamus or "Roseau" (a reed-like material), used during the time of the Roman Empire. These calamus pens wore out too quickly, so the feather quill soon began to be used instead. The feather quill continued to develop into the amazing writing instrument we know today.

ARRIVAL OF THE FOUNTAIN PEN

In 1827 the inventor Petrache Poenaru patented the fountain pen, developed from a large swan pen. However, it took a few years of innovation before it became popular.

In 1850 the first pen with a hard rubber reservoir and free-flowing ink with a gold nib was produced. Then Duncan MacKinnon and Alonzo T. Cross invented in 1870 a variant of the pen that used a wire in a tube as a valve for the ink. However, all of these pens were filled with an eyedropper.

Everything changed when Lewis Waterman realized that the fountain pens of the time had no control over the flow of ink, which in turn led to ink leakage. In 1883 Waterman improved the existing fountain pen with a capillary loading system in order not to spill the ink. Since then the fountain pen market became massive. The fountain pen established itself as a general writing product, and from then until today, it has been used to write history.

Another benchmark that introduced innovations in feeding mechanisms was Parker, with its famous "Lucky Curve" mechanism that allowed excess ink to flow back into the pen body after use, which helped prevent leakage.

Compared to the feeding and filling mechanisms, nibs have not changed that much over the years. Nowadays, the fountain pen nib presents a variety adaptable to all writing tastes: from extra fine nibs (EF), for lovers of small print writing and for fine drawing lines, to double coarse (BB). Thus, the fountain pen has become a collector's item and a piece of nostalgia.

CALLIGRAPHY AS A SOURCE OF INSPIRATION In our daily lives, we rely on letters to navigate the world, express ourselves and communicate with others. The fountain pen is the piece best suited for this purpose. Calligraphy is the art of writing with neat and artistic handwriting following different styles. The word comes from the Greek "καλλιγραφία" words "beauty" (Kallos) and "writing" (Graphein).

Nowadays many collectors use their pieces for inspiration and writing by playing with the different typefaces. The most important thing when writing is always to have fun.

If you require more information or if you would like to place an order, please do not hesitate to contact us or visit our store in Madrid, at Nuñez de Balboa 90.
We will be pleased to help you.

The tachymeter of the watch 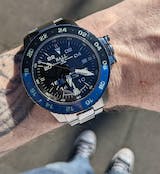